yellonw625.wixsite.com/nathanwong
Nathan Wong
Spirit Scamper
Spirit Scamper is a proof-of-concept multiplayer party game that mimics the style of the Mario Party series. As the host of this attraction, Gremm invites spirits to participate with the promise of becoming human again. In order to win, players must travel across the boards to gather all six body parts. This 3D animated trailer highlights the fun and chaotic nature of what this game entails. 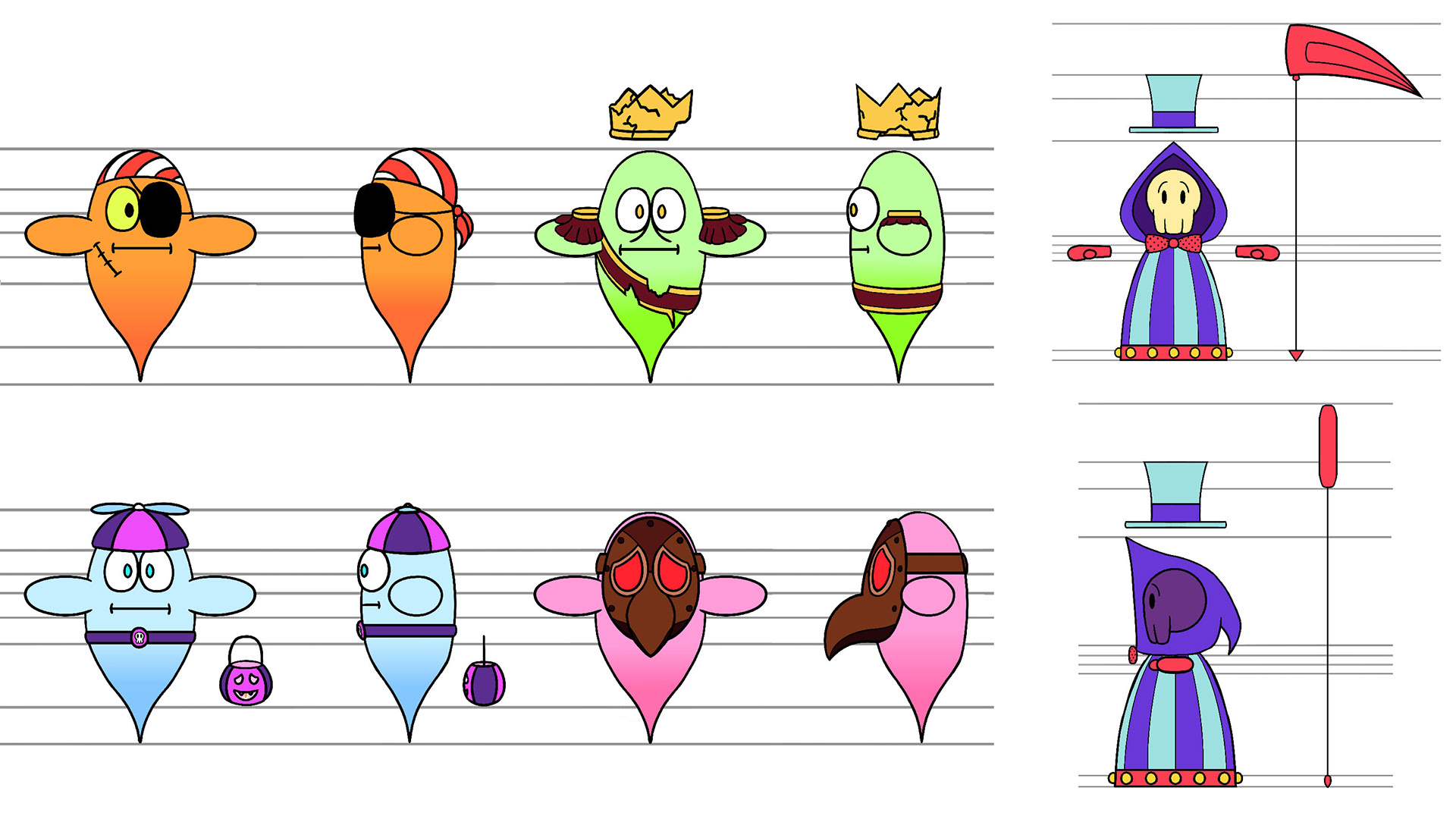 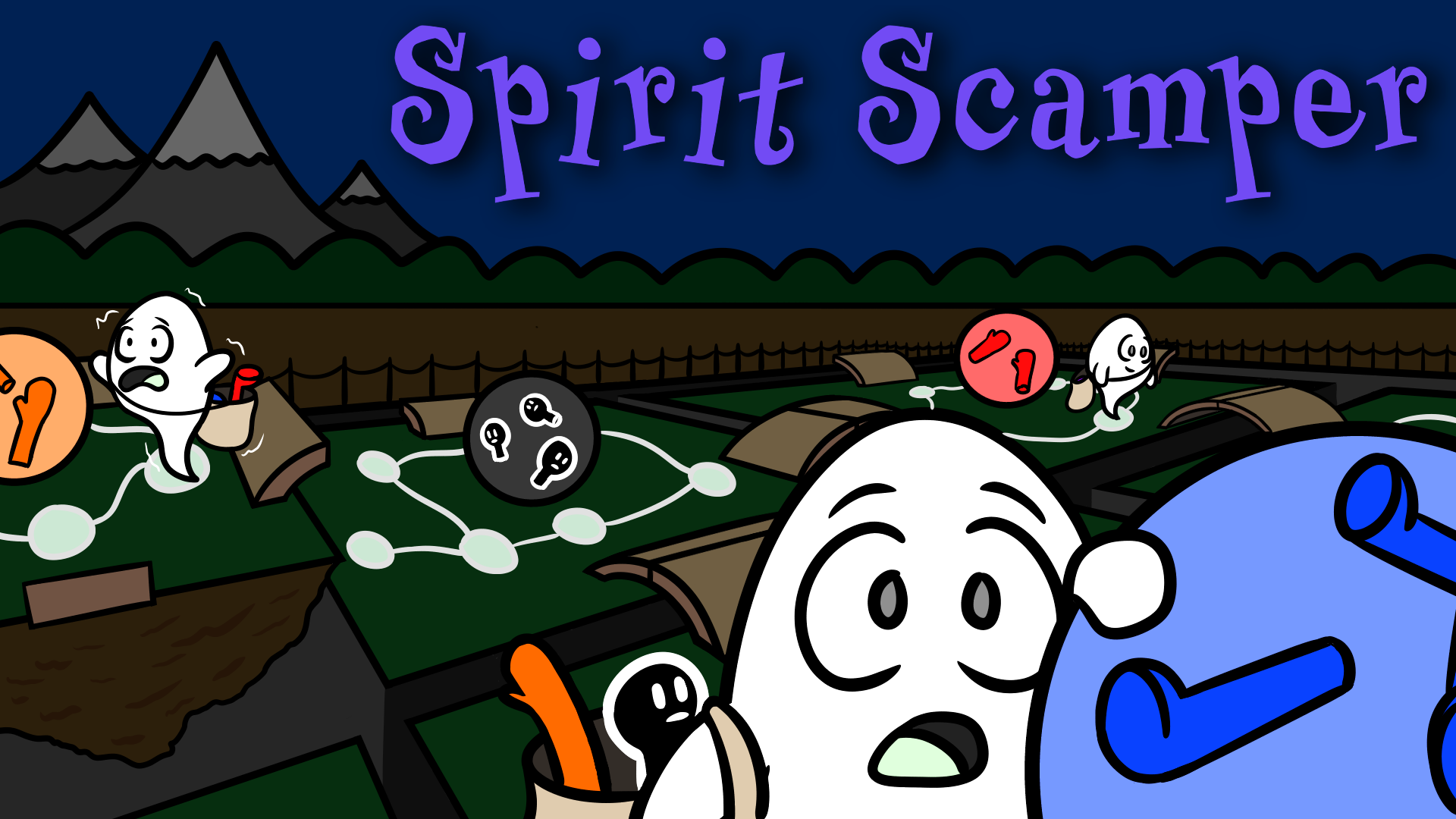 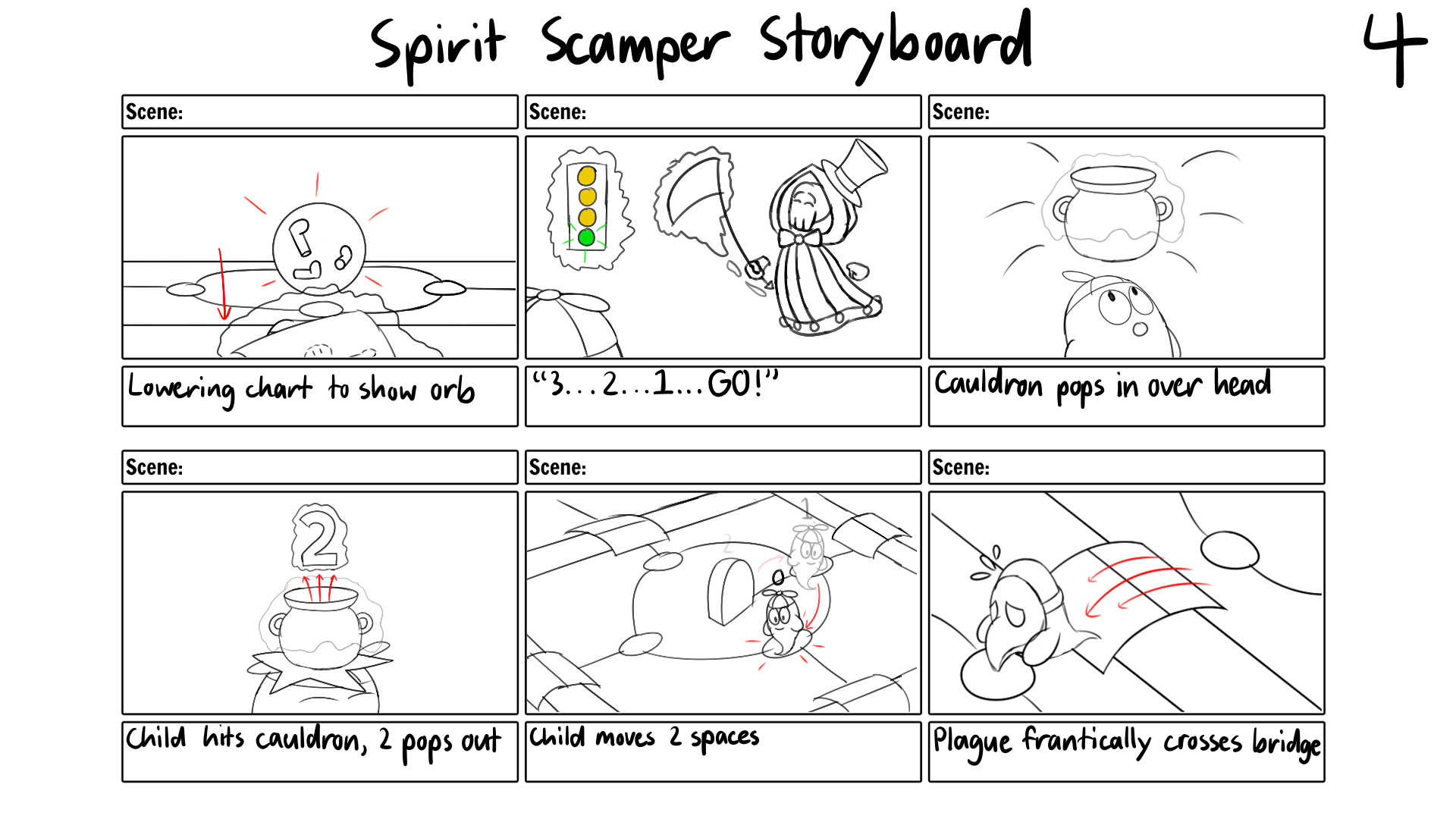 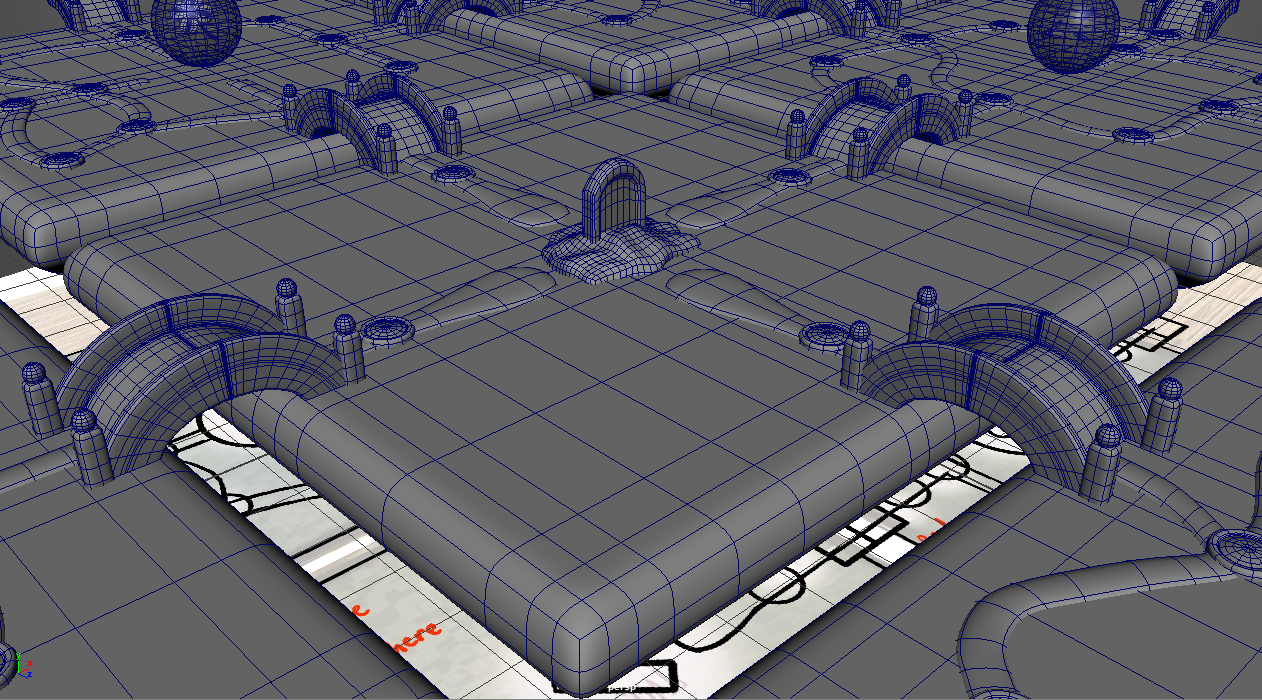 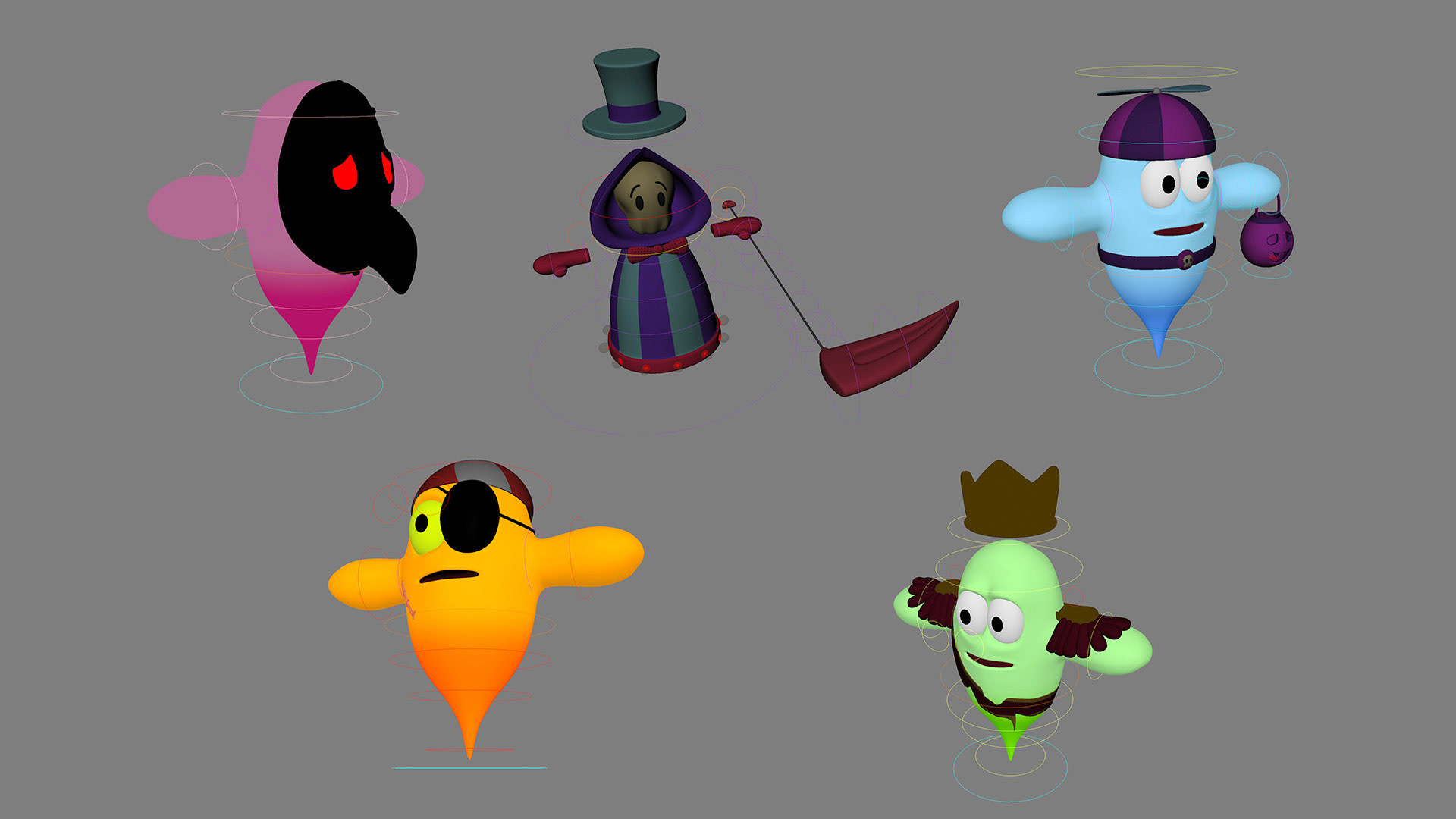 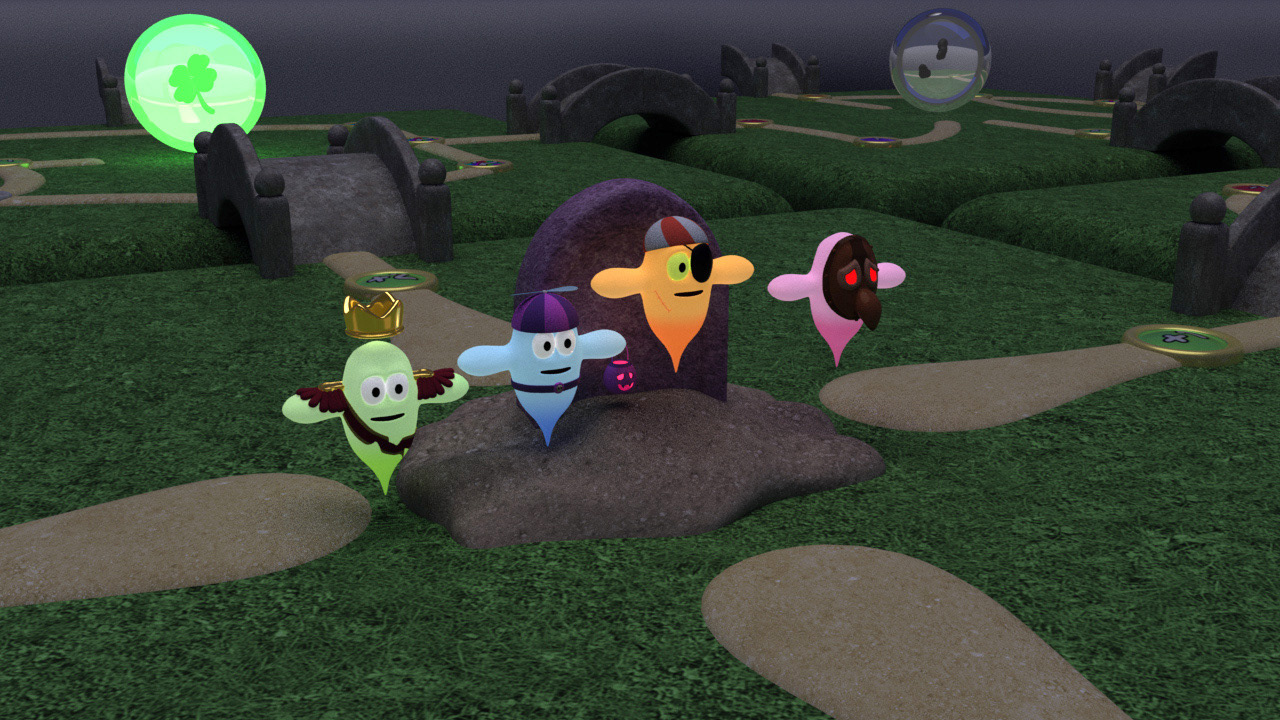 Artist/Thesis Statement
Growing up, I always gravitated towards simple and bright cartoon characters. Whether it was from the popular cartoons from Nickelodeon and Cartoon Network, or the whimsical and family-friendly cast of Nintendo characters, these influences offered me light-hearted fun but also made me want to learn more about their respective worlds. Ever since I was a child, I became anxious quite easily. Continuous horrific events on the news and my general fear of macabre shaped me to become afraid that humanity could eventually collapse at any point. Needless to say, I wanted to forget about those endless worries, which is why I turned to bright and colorful influences. I loved how simple characters such as Yoshi, Kirby, and SpongeBob were full of expression and personality. Despite being nonsensical, they felt truly believable. Their respective environments were equally as complementary to the characters, making me want to learn everything beyond the screen.
As an artist who began as a computer science major, I had quite a bit of catching up to do. I have leaned into simplistic, cartoonish inspirations as my foundation. While I was extremely insecure about my influences, I built up my confidence as an art student through dedication, persistence, and trust in the process (as well as a lot of complaining). While I still have much to learn in the future, my growth as an artist is something I can truly be proud of. There have been plenty of struggles and failures. but what truly keeps me going is when something finally clicks with me and I have a clearer vision of my project. Those epiphanies are what I live for as a developing artist.
My concept for Spirit Scamper is a homage to those bright and colorful childhood inspirations. This is a trailer for a video game concept designed to highlight those cartoonish and expressive character designs that attracted me as a child. My main inspiration was Mario Party and Fall Guys, which portrayed the chaotic fun of party games. I wanted to capture that energy in this trailer, something that would entice the viewer to buy this imaginary game. Spirit Scamper takes place as a spooky attraction in an amusement park, where spirits engage in this event with the promise of becoming human again. This attraction borrows heavily from the Mario Party formula, where players roll a number and land on spaces like a virtual board game. Players must travel around the board collecting coins with the ultimate goal of gathering body parts to become human again. However, the main twist is that the layout of the board can change at any point, which keeps the players scrambling to reach their next destination. In this project, I sought to create cartoonish ghost characters and colorful environments that my child self would have loved. I wanted to challenge myself in 3D by modeling, texturing, rigging, and animating everything to prove that I can follow the animation pipeline with a detailed schedule, as well as follow in the footsteps of my childhood inspirations. This project was mostly accomplished in Autodesk Maya, with post-production done in Adobe Photoshop and Premiere Pro, along with music composed in collaboration with Coleman Moore from the UML Music Department.

Hayley Cook
↑Back to Top